The race to become the first state with a modern Green Amendment is on!

The race is on: check out our website to find out where your state stands! 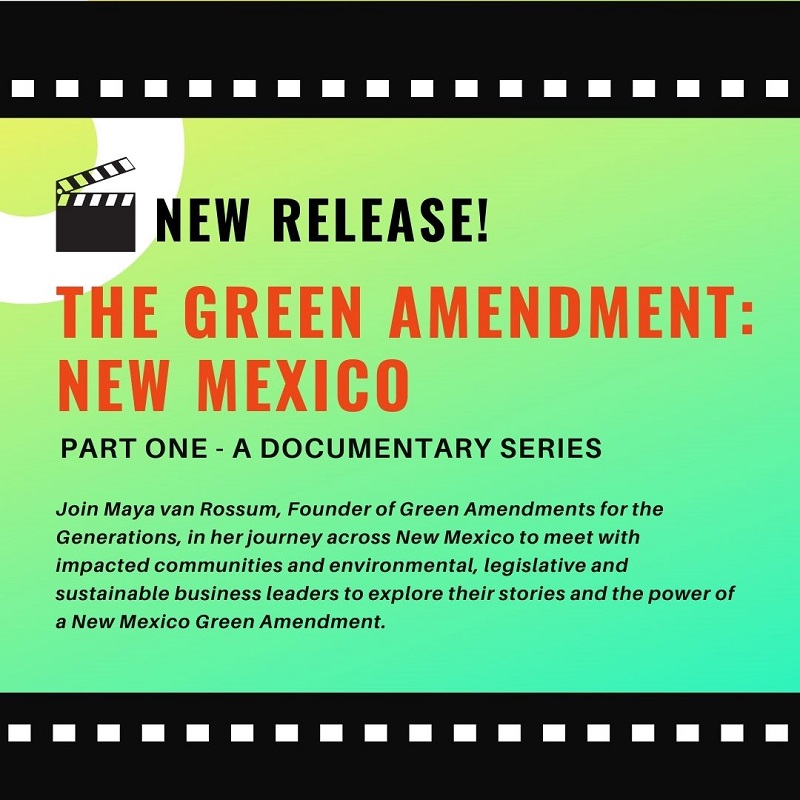 DOCUMENTARY RELEASE:
The first episode of a documentary series focused on the effort in New Mexico to pass a Green Amendment has been released.  The new release of Part One of the series explores the implications a Green Amendment could have for environmental protection in the state, including helping to address the immense and disproportionate health and environmental burdens that communities of color, indigenous, immigrant and low-income communities face across New Mexico from the oil & gas extraction, industrial operations, water scarcity, climate change, uranium mining, PFAS and more. Directed by Emmy-nominated journalist Steve Rogers, episode one features interviews with Senator Antoinette Sedillo Lopez, sponsor of the NM Green Amendment; Emma Rose Cohen, CEO/Founder of Final; Beata Tsosie-Peña, Environmental Health and Justice Program Coordinator for Tewa Women United; Artemisio Romero y Carver, founding member of Youth United for Climate Crisis Action (YUCCA); and Dee George and Penny Aucoin, impacted residents of Otis, NM.

The series follows Green Amendments For The Generations founder Maya van Rossum, as she travels across New Mexico meeting with legislators, indigenous activists, business owners, youth leaders and policy advocates to discuss environmental issues facing the state and how a Green Amendment could provide a pathway for solutions. Watch now!

News from Across the Green Amendment Movement

A lil teaser for the upcoming release of THE 2ND EDITION OF THE GREEN AMENDMENT BOOK! The first legislator to step up and champion the New Mexico #GreenAmendment was Senator Sedillo Lopez and now #NewMexico is a national Green Amendment leader.It is stories like her's and so many others we are excited to have come through in this book and share with you the power and growing excitement around our movement to get your environmental rights in state constitutions across our nation! Use smile.amazon.com/Green-Amendment-Peoples-Healthy-Environment/dp/1633310647/ref=sr_1_2?crid=3714HQ... to pre-order your copy of the book today! ... See MoreSee Less

After you read Nicole's words, what can you do? Solution, go here: www.classy.org/give/255440/#!/donation/checkout ... See MoreSee Less

There is a place for everyone in this movement and we need each and everyone of you! Use www.forthegenerations.org to take action today to support your right to clean air, pure water, healthy environments, and a stable climate for future generations. The #GreenAmendment movement needs you today. ... See MoreSee Less

You can help by joining us in this movement. Register now.

Support Green Amendments For the Generations!

2022 © Copyright, Green Amendments For the Generations.
All Rights Reserved.